They blasted “Back in Black” before the curtain drop, as is much more fitting, but I’ve had Thin Lizzy in my head for nigh two days so we’re going with that.

Maybe I should back up.

Last night I saw Avenged Sevenfold for, I think, the thirteenth time. Maybe the fourteenth. I’ve stopped keeping count because it doesn’t matter if I’ve seen them thirteen times or thirty-three times it will never be enough. I have a post brewing about the opening bands Ghost B.C. and Deftones, but that will come later.

The new stage set up is just incredible. They always go all out on their stage shows but the mock throne room with the King himself towering over and scowling at the crowd was more than I had imagined even after seeing pictures. Huge shoutout to the crew that gets that thing up and takes it down every day because, my gods, it’s a massive set. The attention to detail is amazing as well. I didn’t really get to sit back and look at it until after the show because who the fuck is looking at a stage set when AVENGED SEVENFOLD is on the stage. 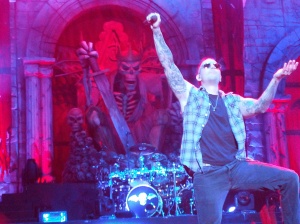 I don’t know the technical term, but the deathbats mounted at the top of the wall above the corroded banners are flamethrowers. Yeah. They went there. That giant King? He moves. There are some other really cool things they’re doing, but I won’t spoil the surprise. You’ll have to see the show and then come back so we can freak out together.

Last night was the first time I had pit seats to see Sevenfold. I’ve had GA at stadium shows and always managed to get within the first ten rows, but the pit at Klipsch Music Center is tiny, tiny, tiny. There’s maybe room for 100-150 people. I had four short people in front of me, seriously, they came up to my shoulder, so I was pretty much at the barricade and it was glorious.

I had a moment while I was standing there next to the stage when I remembered the first time I had seen them. It was February 2009 at the Murat Egyptian room. For those not local, the Murat is a small indoor venue in downtown Indy. The capacity for the room we were in, 600. I feel like it was sold out, but I don’t remember. It was packed, I didn’t get anywhere near the stage. Last night, I’ll have to ask, but I’m pretty sure there were 13-15,000 people at a venue for 25,000. Pavilion was packed, the lawn, despite the rain and thunder was pretty well filled. The guys have come so very far, I was smiling like a fool the entire time the stage was being set up.

The people around me were discussing the Nightmare tour cycle when they had all seen the band for the first time. I love seeing the guys playing Wembley Arena and the O2, because Holy Shit, those are huge venues. I love that I have the memory of seeing them in that small dark room almost five years ago because I can look back at that wall of people, of friends, of fellow fans and giggle and laugh like a lunatic because the guys have come so far. Their stage show has gone from smoke machines and small video screens fixed on risers to a behemoth set with enough fire to be seen from space. And no matter the venue I have always felt at home in Avenged crowds. The shyness that has haunted me all my life and made it difficult to make friends is gone. I talk to people left and right, jump in on conversations two rows back, laugh with people in line. This is family. This is home.