I’m really—really—bad at blogging. I thought that suddenly being thrust into a whole new country and culture I would be better. I’d be one of those bloggers that puts up a new post every week with pictures.

Clearly, this is not the case.

It would seem that while I enjoy long form fiction writing, when it comes to blogging I’m a micro-blogger. But, I’ve committed myself to keeping some form of coherent recollection of this adventure so I will do my damndest to keep up with this thing.

The three hour train ride to Yan’an was really fun. I slept for only a few minutes at a time because the landscape had me preoccupied. Just outside of Xi’an the landscape looked pretty similar to Indiana; lots of fields and a few stray trees with farms in the distance.

I haven’t been to the Southwest United States, so the rugged mountainous landscape coming in to Yan’an was the first time I’d seen that many shades of brown and gold. The sun was setting and it cast this pretty orange glow over these craggily peaks and the scattering of vegetation clinging to them. There were winding rivers, canyons, and small plateaus where people had crops planted.

As a rule, I dislike arriving in new cities at night. There’s something about not really being able to see where you are, the shut up buildings and lack of people that makes new places seem like the far side of Mars.

We arrived in Yan’an just after 7pm and the sun had already packed its bags and hightailed it behind the mountains. The other reason I don’t like arriving somewhere new at night, there’s nothing really to look at. The buildings right there by the road are lit up with streetlights and signs, but past that it’s just dark shapes you can assume are buildings or landscape. So there’s not a lot of distraction to keep me out of my head. And if there is one thing I don’t need when I touchdown somewhere new, it’s time in my head.

But then there’s that middle part of your brain, the one that balances survival with reality. And the reality is that you’ve gone past a grocery store and a supermarket so you can go there in the morning and pick up supplies. The reality is you’ve done this before, just take it slow. The reality is you know in a couple months you’ll know the streets and bus routes and where to get a great meal cheap. The reality is, this isn’t scary, it’s just new.

And then there’s the small part of your brain, it’s quiet now, but in a few weeks it’ll be louder than everything else. It’s the part that sees the lights winding up the mountains and wants to know where they go. It’s the part that hears the names Pagoda Mountain and Phoenix Mountain and wants to climb them. It’s the part that hears there’s a Kung Fu school somewhere in the city and gets a thrill. It’s just a whisper in the back of your head but when the sun comes up it will get louder. It’s that little voice that pushes you out the door to explore, to find that grocery store and see what else is on the street. It’s that voice that sees the bridge and wants to know what’s on the other side.

I’ve been here three months today and while I haven’t figured out the bus routes—the school is within walking distance—I have figured out where I can get a quick good meal and have made friends with some of the street vendors. I get discounts, people. Discounts. Sometimes the bakery I go to gives me a free cookie.

Yan’an is built into the hills and mountains surrounding it. They have literally carved this city into these peaks and valleys. From every window in my apartment I can see a mountain. My kitchen and bedroom windows face a sheer rock face. Really, the mountain is about ten feet from my windows.

My apartment is becoming closer to home. It’s big, two bedrooms, which if I had my books with me would be great because then I could make a library. But alas, my Kindle is my library now. Anyway, I figured out last month that this place feels so big because there aren’t any furry feet running around. This is the first time in my life I’ve not had kitty or dog paws tapping across the floor after me.

I don’t know how people do it.

I’m at the point where I’m thinking of buying a rabbit from one of the people selling them on the street just to fill up the empty space. I haven’t yet. I’m holding out for an adorable stray kitten. And, well, if that doesn’t happen then my pets back home will have to endure endless snuggles.

Have I mentioned yet there’s a primary school in the courtyard of this apartment complex? Yeah. At 7am sharp Monday through Friday they blast this music to announce the beginning of the school day. I can hear them having their gym or recess right now. There’s a man with a microphone saying something in Chinese.

I don’t mind it. Although it recently became a stress point in my life. Now, you see, I’m a pretty private person and I’m not overly social, never have been. So China is a challenge in a lot of ways for me, because as of writing this, I am yet to see another foreigner in this city. So I get stared at a lot, which most days I can ignore, some days I get a little hostile, but fuckin’ hell, I understand why celebrities take swings at the paparazzi.

Anyway, I’ve been told—and I knew before arriving—that people are really curious because like I said, they don’t see non-Chinese people very often. A couple weeks ago I was coming home from the store during the primary school’s lunch hour and a group of five or six girls ran up to me and tried to start a conversation. Fine, I can play nice with the little kids and it was pretty funny trying to figure out what they were saying because they only know two questions in English and my Chinese is limited to pleasantries and asking where things are and identifying fruits and vegetables. So I tried to answer some of their questions for a few minutes.

Then they wanted to know where my apartment is.

They started following me.

Oh no. Oh hell no. I do not need the 300+ K-5 kids in that courtyard to know where my apartment is. People stress me out enough on the street I don’t need to wonder if when I come home at 7 o’ clock at night there might be a small hoard of people gathered by my door wanting to ask me questions. Fuck. No.

So I faked I forgot something at the store.

I did pick up some apples, which I realized I needed as soon as I started walking in the direction of the small grocery store. So that worked out and by the time I made it back to the complex school was back in session and the courtyard was blessedly quiet.

But I have a new rule, I can leave my apartment whenever I want, but under no circumstances can I come back until after lunch or after school is over. It sounds stupid, but if I’m going to endure people staring at me like they’re waiting for me to turn into wyvern I have got to have my Fortress of Solitude.

Buzz lightyear and the famous Cave Houses of Yan’an! 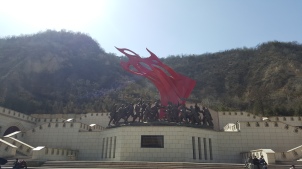 Phoenix Square, center of the city 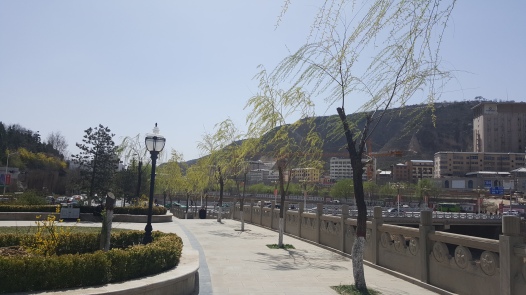 Across the street from Pagoda Mountain

Harley Quinn I chose writing because therapy is expensive. I write in YA and NA in genres fantasy, horror, and sci-fi. I am a music lover. Metal head, rock n' roll chick, punk rock girl, and I do love a good techno dance song.
Published April 25, 2016